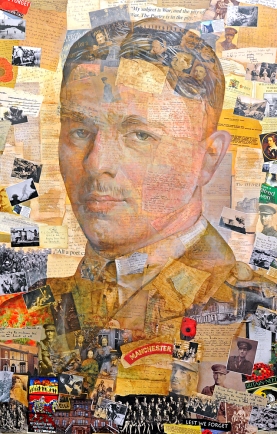 NWS PAUL HEAPS Art work of the Great War poet Wilfred Owen which was unveiled by artist Tony Brown at the Wilfred Owen Story in Brikenhead. 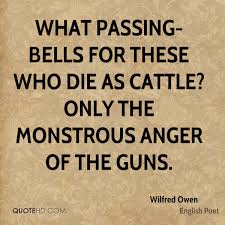 It’s Tuesday, so it must be Cheswardine Primary, and my second day with Shropshire Council’s imaginative project ‘In The Hands of the Boys’, which focusses on World War I. The project uses dance, poetry and photography to explore and share stories about Shropshire’s involvement in the war.  Young people aged 7 to 14 are working as researchers, creative interpreters and performers.

100 boys and young men from 6 schools across Shropshire are working with creative practitioners, heritage specialists and museums and archives. A piece of contemporary dance is being choreographed and (this is the bit I’m delivering) poems written in response to the work of Wilfred Owen, who was born in Oswestry.

This morning, in Cheswardine Primary, set among the green fields and woods of Shropshire, the trenches of northern France felt all of a century away.  But the children really rose to the occasion, writing sensitive and imaginative work in fragments, recalling the fragments of poems left after Wilfred Owen’s death.  Here’s a sample: 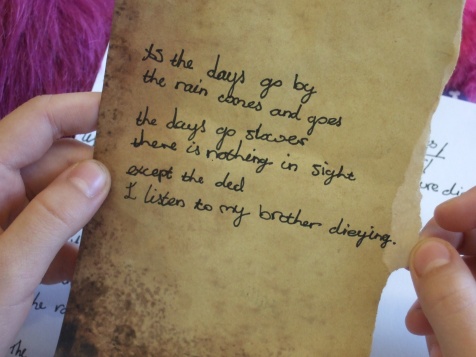 And some of their evaluation after the workshop.  I do love the one about professionalism. 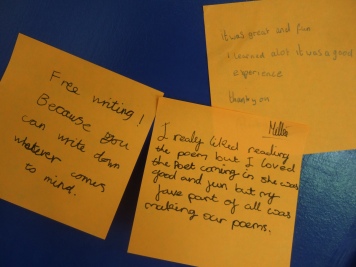 ‘In The Hands of the Boys’ has been funded by a National Lottery grant from the Heritage Lottery Fund ‘Then and Now’ programme (commemorating the centenary of the First World War); Shropshire Council and participating schools.

The portrait of Wilfred Owen at the top of this post is by artist Anthony Brown, unveiled at the Wilfred Owen Story in Birkenhead in 2011.

One thought on “‘Close the curtains for me’”