The starlings lean
like woodsmoke on the fields
and blow away.

I am currently Troubadour of the Hills for Ledbury Poetry Festival, a kind of roaming poet on the Malverns, leading walks and workshops, encouraging poets everywhere to contribute to poems of hills, which are being published now on the LPF website.  With my commissioned poem ‘One Uncertain History’, I featured in March 2019 on BBC Radio 4’s Ramblings programme, ‘Walking a Poem on the Malverns‘, presented by Clare Balding.

My second collection How Time is in Fields came out in spring 2019 from Indigo Dreams Press and is available to buy here.

I was BBC Poet for Shropshire for National Poetry Day 2019 – my commissioned poem for this (all about Shropshire’s unexpected elephants) can be read, watched and listened to here!

My poetry has appeared in The Rialto, The Interpreter’s House, Firth, Lighthouse, Agenda, Magma,  Ambit, Poetry Salzburg Review, The North, Envoi, ArtemisPOETRY, Earthlines, The Moth,  Under The Radar, Bare Fiction, Poetry Ireland Review, Dark Mountain, New Writing Scotland, Pushing Out The Boat, Northwords Now, Acumen, Atrium and others. Read Grass Verge Near Soissons published on Ink, Sweat and Tears here   and Lost and Found in the Palacio de Pena published by And Other Poems here.  In 2015 my commissioned poem Bread Generations was featured on Radio 4’s ethical and religious discussion programme Something Understood.  My first collection Not Lost Since Last Time was published by Oversteps Books in 2013 and launched at StAnza International Poetry Festival. 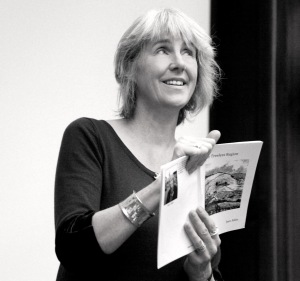 Read ‘What’s Human’, which was included in the tenth issue of Best Scottish Poems, an online selection of twenty of the best poems by Scottish poets to appear in books, pamphlets and literary magazines during 2013.

I’m a member of Writing West Midland’s writer development programme, Room 204 and of Border Poets.  On the first Tuesday of every other month, I organise The Poetry Lounge in The Sitting Room in Ludlow – an open mic with guest poets.